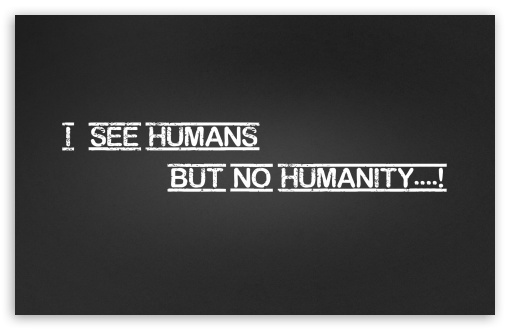 I see humans but no humanity

To our brothers and sisters in Palestine, Central African Republic, Congo, Kashmir, Xinjiang, Burma, and elsewhere, who are experiencing unspeakable atrocities of gross magnitude, our du’as are with you all each and every day for Allah’s continuous nusrah (assistance) to descend, in the way He Divinely decides. Remember, “Nasrun minAllahi wa fatHun qareeb” – The help of Allah and a near victory.

To all adherents of Christianity and Judaism: we Muslims harbour no ill feelings towards you, and we welcome any meaningful initiative towards a practical solution to combat inter-religious strife. Our unity on humanitarian grounds is imperative in routing the cancer that is Zionism.

To Zionists: Quit using Judaism as a front, because it is an Abrahamic faith with a rich diverse history, and none of you resemble its pivotal figures in word or deed. Your idea of a “promised land” is nothing but a false notion and it serves only as a frank reminder of what a sorry excuse your so-called “nation” has for its “security”. Wake up and smell the gunpowder. Bombing a place to pieces has never truly achieved a peaceful and harmonious society in the past, so what makes you think that will change now? We urge you to return to the basic moral code with which all of humanity was created. If you refuse to turn away from your wretched ways of state-sponsored violence against a historically peaceful nation in a land they always inhabited, then may you burn in the lowest of the depths of Hell, eternally.

P. S. To the so-called leaders of the Arab world and Muslim world (two different entities): Your silence and inaction during the oppressive episodes within your regions have rendered you gutless, heartless, spineless, utterly shameless, and reflects anything but God consciousness and Prophetic wisdom. May you suffer the same fate as your stubborn Zionist bed buddies.